We have many colours of Poland Bantam hens available from plain reds and blues to the fun and quirky splash varieties. Polish Chickens are so full of character, we love them at Pipinchick, they are a firm favourite! Chatty, funny and delightful to watch chicken about the garden!
See below colours and pictures of our available Polish Chickens. 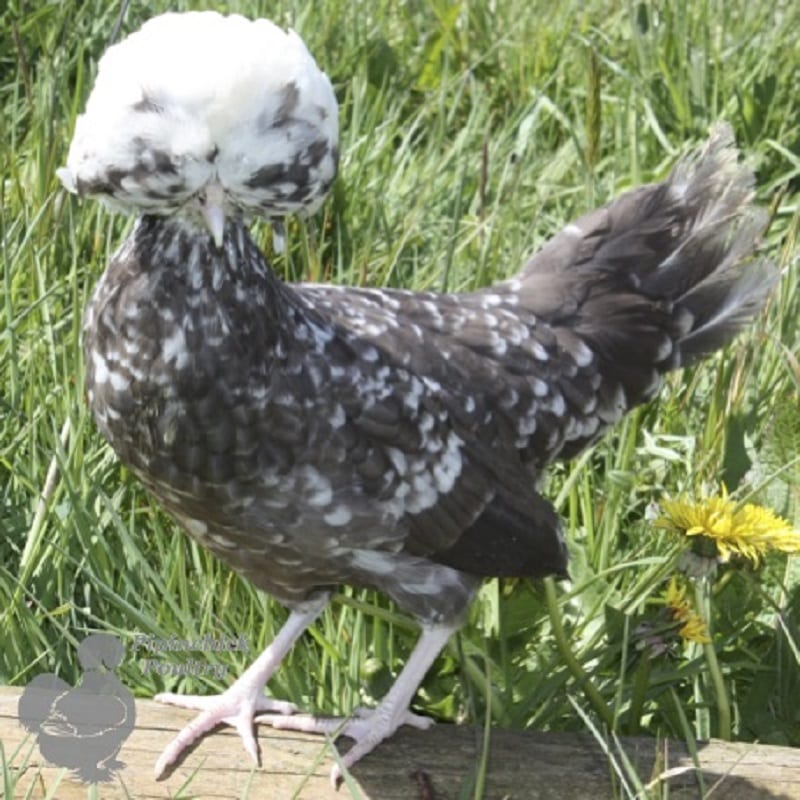 The Polish is an unusual and beautiful bird with pretty soft plumage, delicate features and a large crested pompom on their heads.
They are absolute Divas and so, so fun to own and be around. They love human contact and will perch on your shoulder like a parrot chatting to you! They do make wonderful pets although not robust with being handled by young children. They need a gentle touch but will love the contact and attention! They have a plucky yet gentle nature, they are very inquisitive and want to be a part of everything that’s going on.
They do need extra care than your average chicken but if you want a pet that will love you and your cuddles and want to be with you in the garden then the Polish is for you! The Polish chicken is not ideal for the first-time chicken keeper and is more of an aviary bird, they will not cope well in a mixed flock of larger breeds and SHOULD NEVER BE PUT WITH HYBRIDS.
They are delicate and can easily be shocked, spooked or affected by their environment and the elements, they like to be warm and dry and will need extra care. They cannot be put in a free roaming field, they will not survive, they are very much a back garden pet chicken.
They can fly fairly well and love to perch, it is essential for them to have an area either in their house or in their run where they can feel safe on a perch up high looking down on the goings ons.
Poultry tonic or multi vitamins should be given regularly. Known in the U.K. as the Poland or Polish, it is one of the oldest pure breed chickens in Europe it’s classed as a bantam sized pure breed and recorded back as early as the 16th century.
They received classification at the first poultry show in London in 1845 at this time they were available in only four colours, now available in lots of colours including the stunning laced in black, gold and chamois, chocolate and black splash, plain gold, khaki, red, white, blue, black and are also available as frizzles.
Polish hens will lay a good number of small white eggs at about 4-5 a week in the summer months. they start laying at around 8-10 months old, they are generally classed as a non-sitting bird, but they can occasionally become broody.